Generally an unmoderated forum for discussion of pretty much any topic. The focus however, is usually politics.
Post Reply
First unread post • 104 posts

60 Minutes goes inside the Lincoln Project

Yeah, their Lyndsey fact got me on the topic. Here's the full report:


https://www.youtube.com/watch?v=s95VhNZmigw
"When you can make people believe absurdities, you can make them commit atrocities."
-- Voltaire
1312.
Top

https://www.youtube.com/watch?v=wpAEgxIidn0
"When you can make people believe absurdities, you can make them commit atrocities."
-- Voltaire
1312.
Top

Too bad they didn't include Mullen's Covidiot diagnosis. 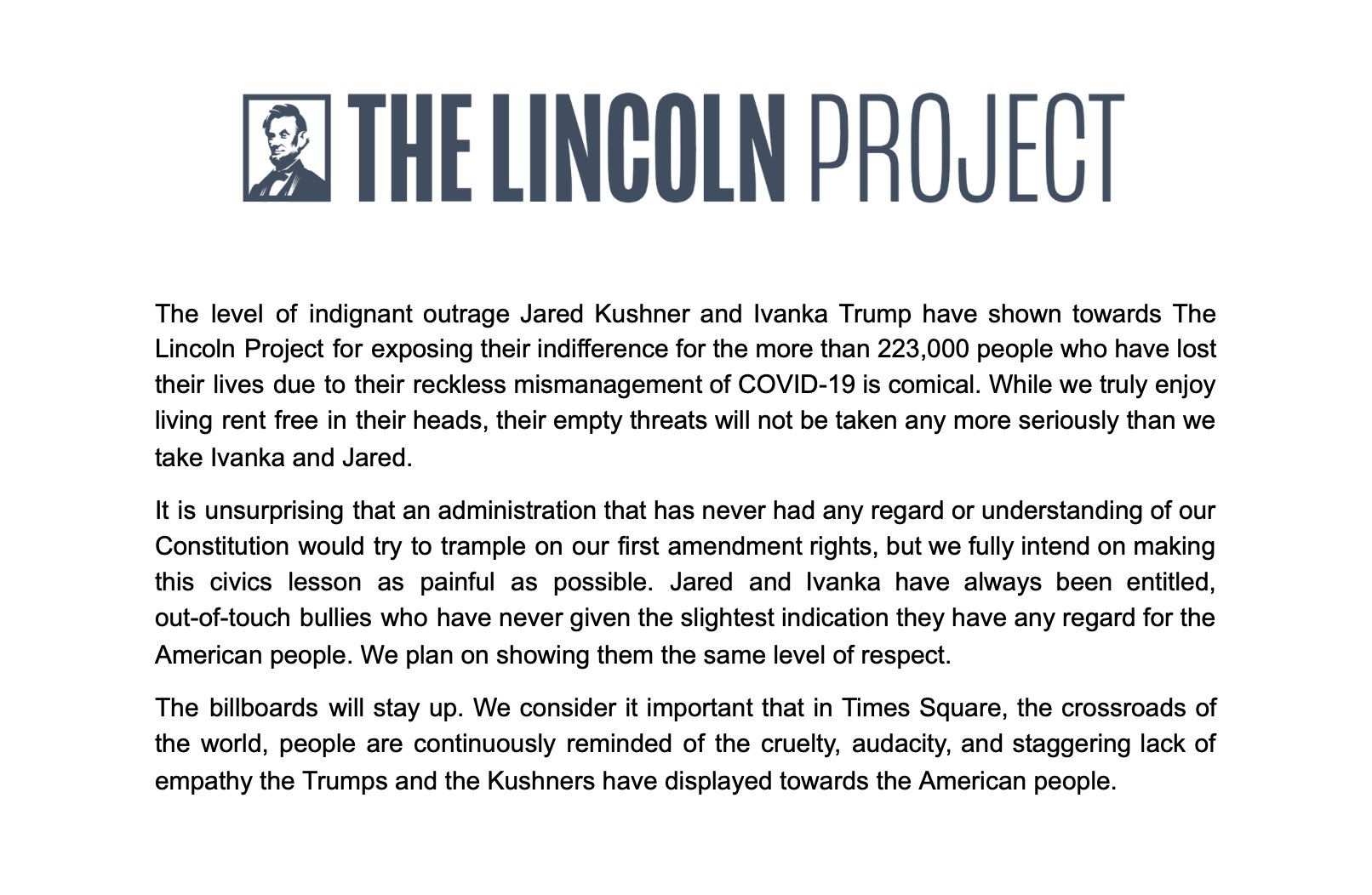 Yeah, like trump once said...."there will so much whining you'll get tired of whining."
Top

Not Lincoln but this seems like the best place. This is absolutely perfect. If only we could have 4 minute ads.

My goodness, they're trembling in their boots.

billy.pilgrim wrote: ↑
Sat Oct 24, 2020 6:47 pm
Not Lincoln but this seems like the best place. This is absolutely perfect. If only we could have 4 minute ads. 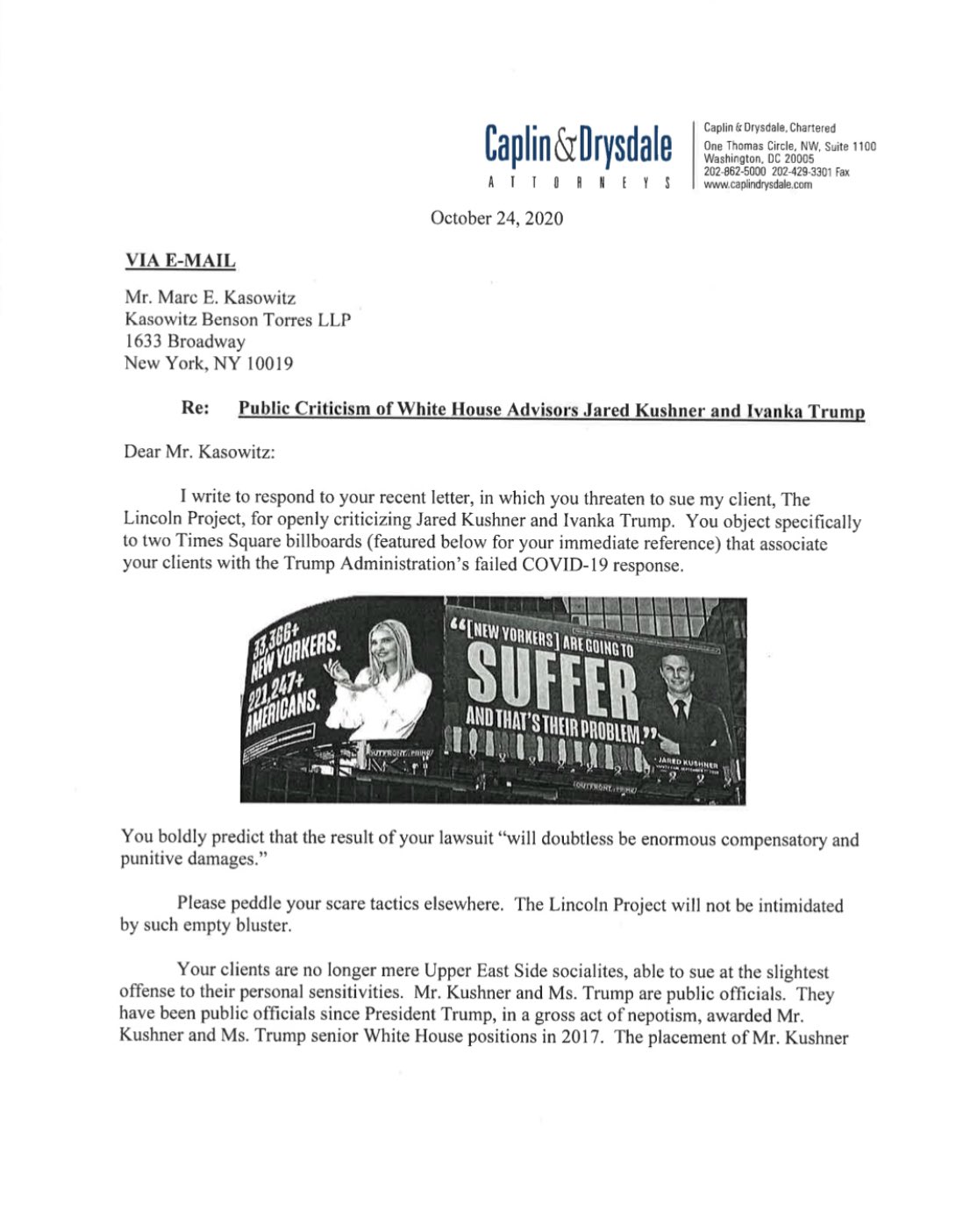 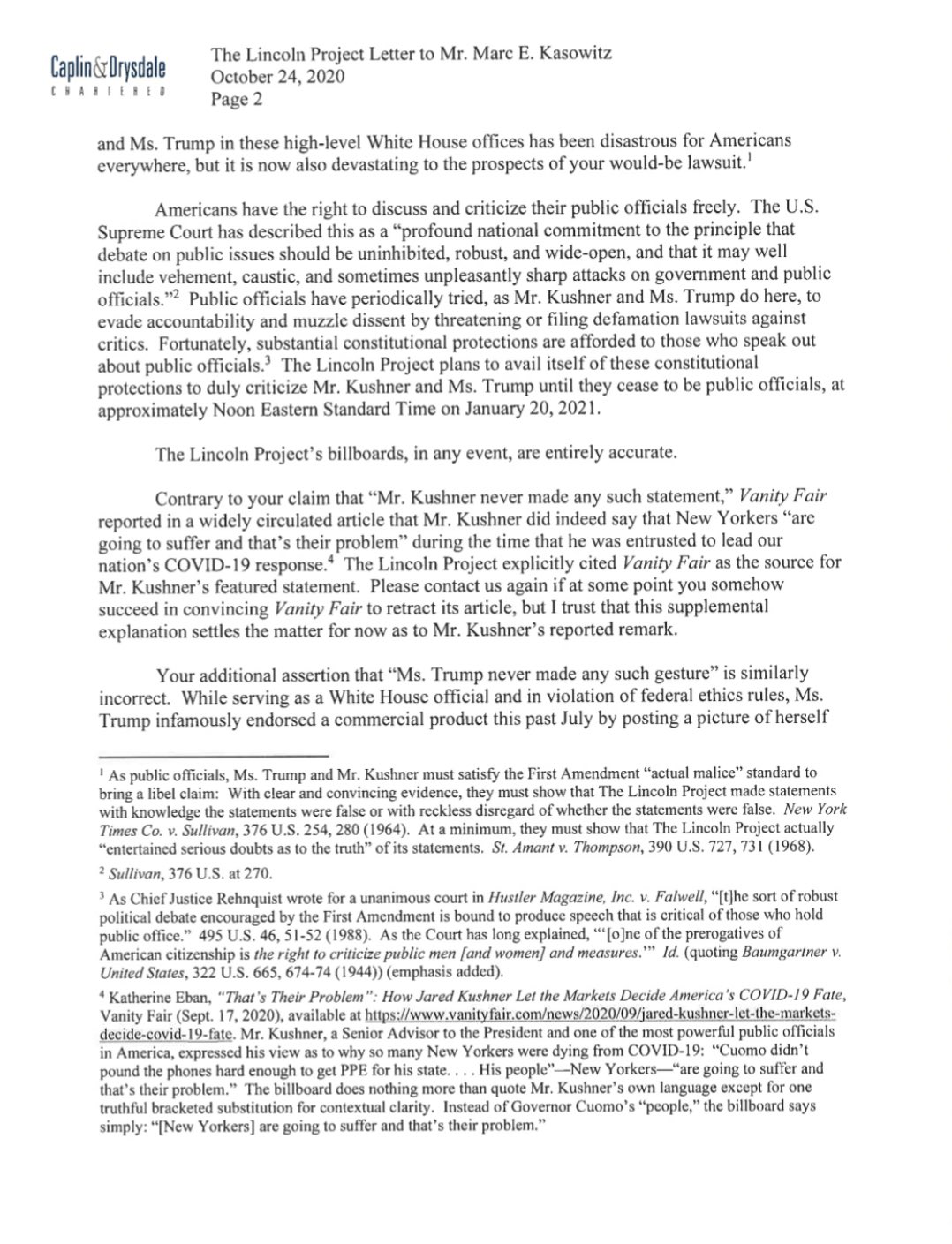 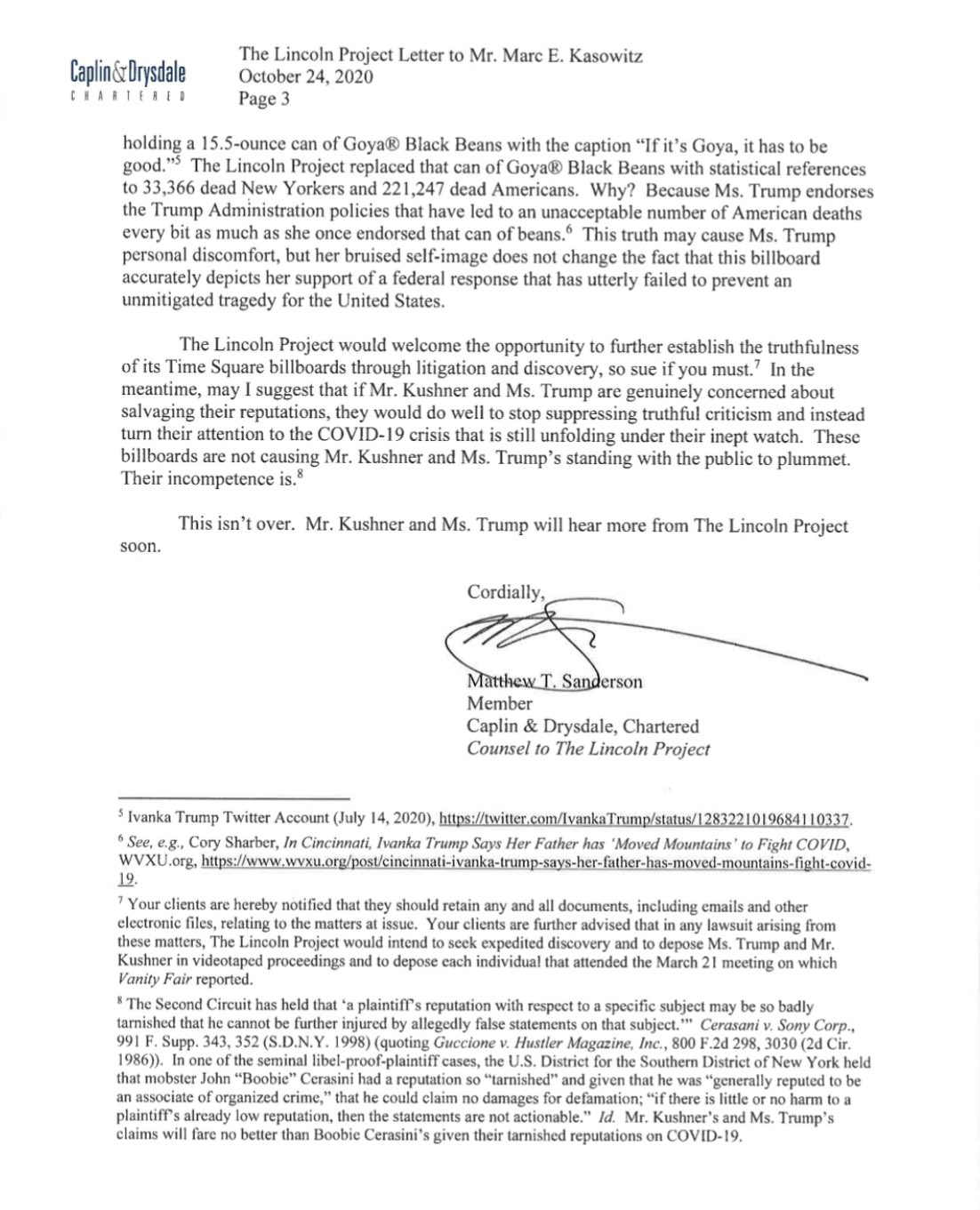 Ummm, it's "doubtless" that the judge will throw out the suit during preliminary motions, and might even make Ivanka and Jared pay "enormous compensatory and punitive damages" for bringing a frivolous suit.

I think that was lawyer-speak for "stick your pathetic threat up your ass."
Top

I don't have bumper stickers, but I would love to see this one.

Is it possible that Joe will outperform Obama 2008?

I know I can't be the only person with tears in their eyes right now.

I like presidents that are not reality show drama queens.

I like a president who doesn't fantasize about dating his daughter.

I like a man who hugs all his kids not just his daughter.

Boom. Mic drop. This is the one to run everywhere - over and over - and Sam Elliott killed it.

I like a man who doesn't kill off his voters with a pandemic.

Well, turn out the lights, he's done for--when Sam Elliott narrates an ad for your competitor, you're just plain f*cked.

The Republican party as a whole, is responsible for tRump.. and if they don't do some soul searching America is doomed.
Republicans enemy of all that is decent...

He was never held accountable for anything in his life. It's time. #BidenHarris2020

Great ad. A vote for Biden/Harris is a vote for decency, responsibility and democracy.

for all the posts.

Be a man, be a woman, be a responsible adult. Be a caring adult. Vote for Joe.

Busy, busy folks. Just some of what they've put out recently:

Parasite
Sep 9
South Carolinians have voted for Lindsey before, but this is the first time they truly know who he is.

Don the Con
Sep 14
Nobody has ever spent a *billion* dollars to go down 10 points.

Don, you got conned.

Broke
Sep 15
All of that money. For nothing.

Plan
Sep 17
Trump has a plan for coronavirus: herd immunity.

Say goodbye to your parents, your neighbors, and your friends.

Because the Trump plan will kill millions in the next four years.

Goodness
Sep 18
Presidents should be good.

The Choice
Sep 25
The @SenateGOP is willing to tear this country apart to remake America in Trump's image. Their loyalty is to power, not us.

They must be stopped.

Whispers II
Sep 26
Everyone knows it's over. Everyone, except you.

Our Moment
Sep 29
11 years ago, Sully was called for his moment. Now, we are all called to this moment.

Join Sully in regaining control of this nation's destiny by voting Donald Trump out.

The Collapse
Sep 30
That was terrible, @realDonaldTrump — and you just collapsed in front of the whole world.

Our fight
Oct 4
Millions of Americans have fought to preserve the freedoms Donald Trump now threatens.

Hospital
Oct 6
When you die of COVID-19, you die alone.
Vote Him Out.

Imagine
Oct 20
This election, former RNC Chair and a lifelong Republican, Michael Steele, is voting to restore the soul of our nation.

Mourning in the Republican Party
Oct 22

She's With Them
Oct 26
Susan Collins could have stood up for us.

But she's not with us. She's with them.

Lying Lindsey
Sep 25
We have previously compared Lindsey Graham to a pilot fish, which is a type of smaller fish that survives by eating parasites on larger fish. Perhaps we were being too generous. Lindsey Graham is not the pilot fish. He is the parasite. He is a sick human being who disgraces and destroys the whole of humanity with his very being. He is a pathetic putrid parasitic plum.

Like Scabies that lays eggs in its host, the Lindsey parasite lays lie after lie after lie. He has no self dignity. He will go on the record and say one thing and contradict himself the next day when it suits his needs. Most recently it was Lindsey saying he would not support the nomination of a Supreme Court justice in the final year of Trump’s term the same way he blocked Obama’s nomination for an entire year. Yet with under 40 days in left on the Trump genocidal regime, Lying Lindsey now sings a different tune.

Bye Rudy
Sep 29
We are counting down the days until Rudy Giuliani and Donald Trump become official cellmates.

Trump Crime Family
Oct 23
We have previously made dozens of videos focused on the rampant and unprecedented corruption of the Trump family while Trump was in office. Our newest video, ‘Trump Crime Family’ ties it all together, and makes the strongest case that the Trumps are no different than the mafia families of the past. The ‘Trump Crime Family has violated thousands of laws (Federal and State), engaged in documented domestic and international corruption, and utterly destroyed every ethical principle turning the White House which was once the people’s house into the money laundering Trump trap house.

It is our duty as American citizens who value our constitution to vote out the Trump cartel and bring back decency to the White House and this country.

Our new video ‘Traffic Stop’ depicts what the future holds if Trump is elected. Frankly, the appointment of Amy Coney Barrett likely spells the death knell to Roe v. Wade as the constitutional protections surrounding abortion may be eliminated. For those who sat at home last election who are now dismayed at these results and the constitutional liberties now tossed out the window, this is what’s at stake.

This is why we launched this video with the hashtag #WhatsAtStake.

With a Democratic President in Joe Biden and Democratic Senate, we will have the ability to fight for many of the rights Trump and the GOP have taken from the American people. If Trump and the GOP prevail this election, the worst depictions of American dystopia from fiction movies and horror novels will be a reality.

This is what's at stake.

Trump Administration Officials for Biden
Oct 26
Never before have so many high-ranking staffers of an incumbent president opposed his reelection and endorsed his opponent.
"When you can make people believe absurdities, you can make them commit atrocities."
-- Voltaire
1312.
Top

This needs to be run nationally.