Generally an unmoderated forum for discussion of pretty much any topic. The focus however, is usually politics.
Post Reply
First unread post • 513 posts

18 House Republican rats are deserting the sinking POSPOTUS ship vs. just 3 retiring Dems.
"When you can make people believe absurdities, you can make them commit atrocities."
-- Voltaire
Top

US envoy on Ukraine, named in Trump scandal, resigns: source

US special representative on Ukraine Kurt Volker resigned Friday after Congress ordered him to answer questions in an impeachment investigation on President Donald Trump, a source said....

Whatever, further evidence of the collapse of the POSPOTUS admin*.

Edit: TV news says he will testify next week.
"When you can make people believe absurdities, you can make them commit atrocities."
-- Voltaire
Top

Even the "actings " are scurrying off the tRump Titanic. 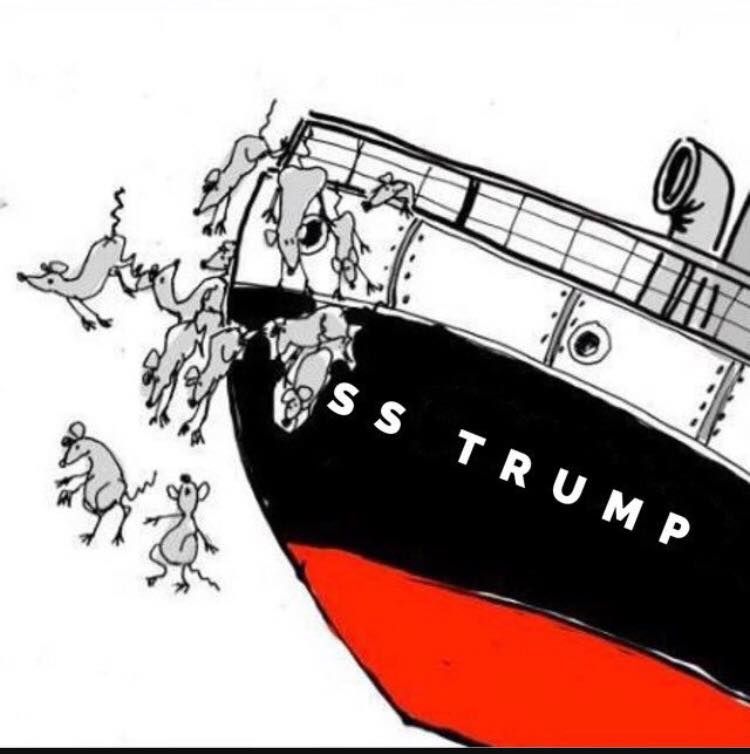 Even the "actings " are scurrying off the tRump Titanic.

184 days, just 9 days short of overtaking Flynn - remember him? - for 2nd most durable Dolt .45 DHS secretary. The next one will be #5. Homeland Security secretary for POSPOTUS ain't a very secure job, irony. Not an encouraging commentary on the stability of our domestic safety, is it?

... also has two young daughters and a wife with whom he wants to spend more time.

Found: "Barron Trump is leaving the WH because he wants to spend more time with a real family."

The announcement has been planned for weeks, sources close to McAleenan say, and has nothing to do with the Ukraine scandal in which Trump and several other Cabinet officials are currently enmeshed.

… McAleenan has also been in the position of working for a President who -- critics say --seems to see immigration in starkly political and often racist terms.

The President appointing hardliners to leadership positions in his department hasn't made his job any easier.

In an interview with The Washington Post published on October 1, McAleenan -- whom Trump never formally nominated for the Cabinet position -- said that while he controls his department, "What I don't have control over is the tone, the message, the public face and approach of the department in an increasingly polarized time. That's uncomfortable, as the accountable, senior figure."

Other acting figures in the department whose tone and tenor are more Trump-like -- acting commissioner of US Customs and Border Protection Mark Morgan and acting director of US Citizenship and Immigration Services Ken Cuccinelli -- have caused him difficulties, sources tell CNN, both by seemingly openly campaigning to replace him and by pushing rules that have seemed harsh to many in the public.

There we go. Leaving aside politics, most chaotic and incompetent admin* ever.

... McAleenan is also proud of having pushed DHS to declare unequivocally that white supremacists pose a growing threat to the American people, a statement the White House previously refused to make in as stark a way, the source close to the acting secretary said. "The El Paso shooting hit close to home," the source said, noting that six of those killed were family members of five agents and officers who work for the Department of Homeland Security.

It's sad when it's a significant accomplishment to say that white supremacists are bad.

For 24 hours last week, Trey Gowdy, the former South Carolina congressman best known for leading congressional investigations of Hillary Clinton, was the new face of President Donald Trump’s outside legal defense and a symbol of a streamlined effort to respond to a fast-moving impeachment inquiry.

A day later, the arrangement fell apart, with lobbying rules prohibiting Gowdy from starting until January, possibly after the inquiry is over. Now, according to two people familiar with events, Gowdy is never expected to join the team. And Trump advisers are back to square one, searching for a different lawyer.

How a celebrated announcement quickly ended in disarray offers a rare public glimpse into the internal posturing — and undercutting of colleagues — that has been playing out in the West Wing on a daily basis since House Speaker Nancy Pelosi announced a formal impeachment inquiry last month. Even as the White House confronts a deepening threat to Trump’s presidency, it has struggled to decide how to respond, and who should lead that response....

Leaving aside politics, this is the most chaotic and incompetent admin* ever.
"When you can make people believe absurdities, you can make them commit atrocities."
-- Voltaire
Top

Good, it will be less disruptive to govt when Perry goes to prison for campaign law felonies and treason.
"When you can make people believe absurdities, you can make them commit atrocities."
-- Voltaire
Top

I can't find that.
"When you can make people believe absurdities, you can make them commit atrocities."
-- Voltaire
Top

That article is 10/03. Everything I've seen today says he's leaving.
"When you can make people believe absurdities, you can make them commit atrocities."
-- Voltaire
Top

That article is 10/03. Everything I've seen today says he's leaving.

It was originally reported he was leaving on the 3rd, then he denied it, followed by his leaving today.

Ah, I thought that O'Really's was saying that Perry said "Fake News" today.
"When you can make people believe absurdities, you can make them commit atrocities."
-- Voltaire
Top

A Blockade Against Impeachment Is Crumbling as Witnesses Agree to Talk

The latest disclosures came Wednesday, when a former top aide to Secretary of State Mike Pompeo offered an inside account of what he said was a demoralized State Department, where career diplomats were sidelined and others apparently were pressed to use their posts “to advance domestic political objectives.” In six hours of voluntary testimony, the former aide, Michael McKinley, told impeachment investigators that he quit his post as Pompeo’s senior adviser amid mounting frustrations over the Trump administration’s treatment of diplomats and its failure to support them in the face of the impeachment inquiry, according to a copy of his opening remarks....

Michael McKinley is also career foreign service, so I'm not sure if he's Repug and am not adding him to my "rats (patriots)" list.

On Thursday, Democrats are set to hear from Gordon D. Sondland, the U.S. ambassador to the European Union, a central figure in the president’s pressure campaign on Ukraine. He is expected to testify that he learned that Trump did not intend to invite President Volodymyr Zelenskiy of Ukraine to a meeting in the Oval Office until Zelenskiy pledged to open an investigation that could benefit Trump’s political fortunes — bolstering a central allegation in the inquiry that the president steered foreign policy for political gain.

Gordon D. Sondland, the U.S. ambassador to the European Union, has been placed on the "rats (patriots)" list. He has not been Fired / Quit . . . yet.

And Democratic lawmakers have directed William B. Taylor Jr., one of the top American diplomats in Ukraine, to appear before their committees next Tuesday, according to an official familiar with the investigation. Text messages produced as part of the inquiry suggest that Taylor was deeply uneasy about what he saw as an effort by Trump aides to use a $391 million package of security assistance as leverage over Ukraine for political favors, calling the notion “crazy.”

William B. Taylor Jr., chargé d'affaires for Ukraine, does not make either list. I'm not sure if he's Repug and he has not been Fired / Quit . . . yet.

... Many administration officials targeted for depositions by Democrats are diplomatic veterans who have expressed anger and frustration about what they described as the hijacking of U.S. foreign policy. They have no particular loyalty to Trump nor are they subject to the same presidential powers to block them from testifying....

Under alternating hourlong question-and-answer sessions by Democratic and Republican staff lawyers, Marie L. Yovanovitch, the former ambassador to Ukraine, said she had been ousted at Trump’s direction on the basis of “unfounded and false claims.”

I'm not sure if Marie L. Yovanovitch is Repug, but she is an addition to this Fired / Quit list.

Fiona Hill, a former National Security Council aide, said John R. Bolton, then the national security adviser, was so alarmed by the activities of Giuliani, Sondland and others that he instructed her to alert White House lawyers. She said she reported Sondland to intelligence officials as a possible national security risk as well.

I'm not sure if Fiona Hill is Repug, but she is an addition to this Fired / Quit list.

“We run through the process of putting this debt burden on somebody… but it rides on their credit files—it rides on their back—for decades,” A. Wayne Johnson, the Department of Education’s Chief Strategy and Transformation Officer, told the Wall Street Journal. “The time has come for us to end and stop the insanity.” ...

... Mark Mitchell, acting assistant defense secretary for special operations and low-intensity conflict, submitted his resignation "as of November 1," as first reported by CNN.

Mitchell has been the Pentagon's top special operations official since June 22, when his predecessor, Owen West, resigned to spend more time with his family. West held the job for just over 18 months....

Their letter, provided to Business Insider, notes reforms included in the 2017 National Defense Authorization Act "designed to enhance the role of the Assistant Secretary of Defense for Special Operations and Low Intensity Conflict [ASD SOLIC] in providing for civilian oversight and advocacy of Special Operations Forces."

But a May 2019 report by the Government Accountability Office cited in the letter found that almost all the remaining tasks related to those reforms "did not have clear time frames for implementation" and that "current guidance" about the assistant secretary's responsibilities was "outdated."

The lawmakers said their biggest concern is the "lack of progress in staffing" the Special Operations secretariat.

A manpower survey commissioned by the assistant secretary's office found that up to 64 full-time jobs may be needed. But as of October 1, 2018, according to the letter, the secretariat had 22 personnel, and by the end of fiscal year 2019 on September 30, it had added just six personnel, "despite clear congressional direction," the letter says....

Leaving aside politics, the admins' chaos and incompetence - worst ever - extends to the Pentagon office of Special Operations and Low Intensity Conflict [SOLIC].
"When you can make people believe absurdities, you can make them commit atrocities."
-- Voltaire
Top

Yeah, even to a casual observer, it's quite evident that most of the folks in the trump administration suffer from being full of Special High Intensity Training (SHIT) but in virtually all cases that training is in the wrong area or is totally irrelevant to their Supposed Position Or Task (SPOT). This, of course, results in a virtual epidemic of SHIT SPOT's.
Top

neoplacebo wrote: ↑
Sun Oct 27, 2019 1:22 am
Yeah, even to a casual observer, it's quite evident that most of the folks in the trump administration suffer from being full of Special High Intensity Training (SHIT) but in virtually all cases that training is in the wrong area or is totally irrelevant to their Supposed Position Or Task (SPOT). This, of course, results in a virtual epidemic of SHIT SPOT's.

Speaking of which, leaving soon?