Generally an unmoderated forum for discussion of pretty much any topic. The focus however, is usually politics.
Post Reply
First unread post • 84 posts

Then, they did it again during the apology!
"When you can make people believe absurdities, you can make them commit atrocities."
-- Voltaire
Top

Then, they did it again during the apology!

The posted comments following the article are outrageously funny!

Dems and libs are coming unglued!

(it didn't take long for Trumper's name to get into the mix!

NBC and Fox News Channel both said Monday that they will stop airing President Donald Trump's campaign advertisement that featured an immigrant convicted of murder.

CNN had rejected the same ad, declaring it racist....

Trump's campaign manager, Brad Parscale, tweeted that NBC News, CNN and Facebook had chosen "to stand with those ILLEGALLY IN THIS COUNTRY." He said the media was trying to control what you see and think.

Parscale made no mention of Fox's decision.

The president's son, Donald Trump Jr., had tweeted over the weekend, noting CNN's refusal to air the advertisement, that "I guess they only run fake news and won't talk about real threats that don't suit their agenda." ...

Fox News standing up for CNN? I'm pretty sure there's something about that in Revelations.

As Conservative brains short circuit across the nation.

The most effective thing Americans can do is boycott companies that advertise on Fox. They bankroll the poison that goes from the studio into Trump’s head. The second is vote.

... The call was an unusual one for a journalist. But Luce — who had tweeted on Friday that Trump “has normalized the language of violence in US politics” — was one of a growing number of prominent voices, including former conservatives who oppose Trump, speaking out against Fox News and Fox Business.

Max Boot, a conservative columnist and former Christian Science Monitor editor, appeared on CNN this morning urging investors to “boycott Fox News until they pull back from the hate.”

Earlier last week, the New York Times and NBC News reported that Cesar Sayoc — who is charged in connection to the pipe bomb packages — had a Twitter feed full of “clips from Fox News broadcasts,” while the Pittsburgh shooter was upset by a conspiracy theory, alluded to by Fox News and Fox Business hosts, that Jewish billionaire George Soros was linked to the migrant caravan traveling to the US.

Over the weekend, after the mass shooting in Pittsburgh, a guest on Lou Dobbs’s show on Fox Business, Chris Farrell, who heads the conservative activist group Judicial Watch, said the migrant caravan was directed by the “Soros-occupied State Department.” Soros was the first reported target of the attempted pipe bomb attacks, and the episode attracted widespread criticism for spreading anti-Semitic tropes.

“This repulsive and dangerous filth is bring spewed courtesy of a publicly owned corporation,” wrote Bill Kristol, an editor at large at the Weekly Standard. “Will no one on the board, in management, or in a position of influence at Fox speak up?” The episode with Farrell was later pulled, and the vice president for programming at Fox Business Network apologized.

Meanwhile, Monday morning, Fox News was speculating about whether the migrant caravan would bring disease to America.

Tucker Carlson's show has been hit by an advertiser boycott, and it's having a visible effect

We'll never learn just how it happened, but this is a reasonable comment:

I work in television. At a station I worked at a couple years ago, one of the executive producers had built a show that was easily accessible to go live in the event that George H W Bush passed away. That show was created in 2014. Point is, media is always ready for when someone of prominence passes. I'm not justifying that the error was ok, but simply pointing out that it isn't uncommon to have something like a fullscreen graphic ready to go in the event of. And to correct Fox News, it wasn't just graphics department error, your TD/Director is also at fault for putting it up, and producer is at fault for having the graphic loaded into the show.


Yep, same dumbass who hit a poor (no longer) marching band guy in the back with an ax on live television and trump sucker fashion icon Pete doesn't believe in things that can't be seen by the human eye because he can't see them.

I am so very grateful I stopped watching fox and more than a little pissed when I bump into one of them like this.
Top

It's pretty bad that Pirro is too bigoted and ugly for even Faux Noise and its advertisers. We'll see, may just be this week. Of no surprise to anyone:

President Trump urges Fox News to bring back Jeanine Pirro, 'keep fighting' for Tucker Carlson
"When you can make people believe absurdities, you can make them commit atrocities."
-- Voltaire
Top

Look for trump to step up his game the next two years; it's gonna be something.
Top

It's not limited to Faux Noise, unfortunately, but it seems that all "news" has been reduced to reports of "adults" playing the old street game of "yo mama."
Top

Just read a story that says Fox News has hired Donna Brazile as a commentator.....strange.
Top

And "never worked a job in his life" paul ryan is now on the board of directors.
Top

O Really wrote: ↑
Tue Mar 19, 2019 9:30 am
It's not limited to Faux Noise, unfortunately, but it seems that all "news" has been reduced to reports of "adults" playing the old street game of "yo mama."

She's good at "playing the old street game of 'yo mama.'"
"When you can make people believe absurdities, you can make them commit atrocities."
-- Voltaire
Top

Jeanine Pirro’s Show Off Fox News Schedule for a 2nd Week
"When you can make people believe absurdities, you can make them commit atrocities."
-- Voltaire
Top

How Stupid Is @foxandfriends? 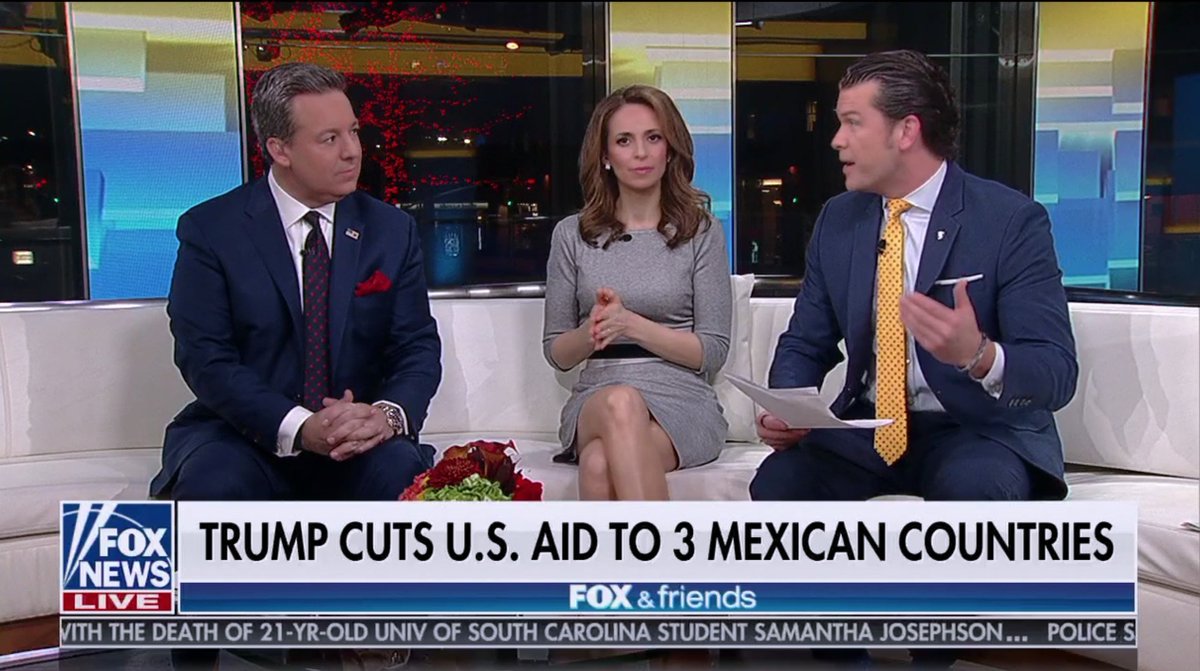 Of course, real reporters and others don't need Kevlar at the border. However, maybe a Faux Noise "journalist", especially one dumb enough to be turned into a fake news prop by CBP does.
"When you can make people believe absurdities, you can make them commit atrocities."
-- Voltaire
Top

Of course, real reporters and others don't need Kevlar at the border. However, maybe a Faux Noise "journalist", especially one dumb enough to be turned into a fake news prop by CBP does.

Heh, I read that story earlier today. The reporter says that the border patrol folks made him wear it....I myself used to wear a bulletproof vest in the shower but lately just wear a tuxedo and just wear the vest to bed at night.
Top

So, how did we end up with a country in which feminists do science? That’s what FOX News host Tucker Carlson wants to know. Carlson specifically asked this while discussing a 2016 study published in the Journal of Consumer Research titled, “Is Eco-Friendly Unmanly? The Green-Feminine Stereotype and Its Effect on Sustainable Consumption.”

"How did we end up with a country where feminists do science?" Carlson asked his guest Mark Steyn. "We 're sort of bound to get a study like this, right?"

For some background, the researchers behind the study asked, “Why are men less likely than women to embrace environmentally friendly products and behaviors?” They then went on to theorize that caring for the environment has always been seen as a feminine trope, and therefore, this stereotype may “motivate men to avoid green behaviors in order to preserve a macho image.” After a series of seven experiments, the researchers proved the theory to be true. Not only did they find that participants widely stereotyped those who engage in green behaviors as feminine, but they also saw that men’s engagement in green behaviors can be influenced by their perceptions of masculinity.

Luckily, feminist scientists are here to help Carlson understand why we let “feminists do science.”

Books. We were allowed to read books.

Let's ask the devices that we owe to Grace Hopper and Ada Lovelace through the network pioneered by Radia Perlman over the airwaves that we are indebted to Hedy Lamarr for!

Science... it's the new witchcraft!

And sometimes, when the moon is full, we even Math.

Democracy and civil rights is how we got a country where “feminists do science.”

(Also, note how he’s drumming up fear around women’s rights to create suspicion around climate change policy. Tells you a lot.)

We couldn’t have said it better ourselves.

Unlike Tucker Carlson and the insecure con snowflakes so worried about their macho image, I'm not too brittle, terrified and delicate to be treehugging man.
"When you can make people believe absurdities, you can make them commit atrocities."
-- Voltaire
Top
Post Reply
84 posts