Generally an unmoderated forum for discussion of pretty much any topic. The focus however, is usually politics.
Post Reply
First unread post • 85 posts

Petition to sell Montana to Canada.

"Also from a Canadian: What if instead we sell Saskatchewan to the US and then on the map Americans would be flipping off the rest of the world like they always do? (Uh, salty!)"

How much of the $1T would we have to give back to get Canada to take North Dakota, too?

Thieves Break into Spirits Factory, Steal Tank of Water Instead of Vodka

They really needed a Montanadian advising them.
"When you can make people believe absurdities, you can make them commit atrocities."
-- Voltaire
1312.
Top

They really needed a Montanadian advising them.

"... it would have required “guts and stupidity” to carry out the heist with a large tanker truck, and would have been more complicated if they had used a smaller tanker truck making several trips.

"When asked if the thieves mistook the water for the stronger liquid, he told CBC: "If they did, they're going to be thinking that vodka is pretty weak. I'd be surprised, but who knows what people are thinking when they come in and take something like that?"

Newfies - had to be Newfies, didn't it?

To be fair, it's Canadian vodka, the iceberg water may be more valuable.

I'm not particularly a vodka drinker, and haven't had any Canadian vodka, but if it's anything like the Maine vodka we got for some gifts this summer, it's really good. Maine, Canada, whatever. Cold River Vodka - buy some if you can find it.
https://www.pressherald.com/2011/01/16/ ... 011-01-16/
Top

I was just making the joke. I haven't had any vodka in decades.
"When you can make people believe absurdities, you can make them commit atrocities."
-- Voltaire
1312.
Top

Good article on anti-vaxxers. "Canada Nice" is wearing thin, as well it should be in the US too...

It really is time to stop being nice about stupidity....

A slogan for these times.
"When you can make people believe absurdities, you can make them commit atrocities."
-- Voltaire
1312.
Top

I'm glad they're giving that kid in Ohio who, upon turning 18, got himself vaccinated, but articles referring to his "rebellion" against his mum remind me of "Alice's Restaurant" when Arlo got thrown into jail.

Some time in the future a group is sitting around talking about their youthful adventures: "I ran off with my boyfriend to Mexico," "I got a full back tattoo of Justin Bieber," "I got involved in a robbery," "I was drunk and disorderly for weeks," ... ... "I got a measles vaccination."
Top

"As Trudeau vacations in Florida, details are once again scarce"

Not so scarce around here. He's rented two very nice beachfront houses on Captiva. Showed up with family and a herd of large rough looking guys with dark shades and earpieces. Plus a bunch of local sheriff's people.

I guess he wants to get out of the Ottawa cold as well as away from the heat from SNC-Lavalin.
Top

In an attempt to out-trash Ontario's Ford, Alberta has elected a United Conservative Party (UCP) majority under leadership of Jason Kenney. Here's what Kenney's about:

Policy positions
Kenney has been a social conservative in his political career, voting in favor of abortion restrictions and against same-sex marriage.

Abortion
Kenney is an anti-abortion politician, voting in favour of abortion restrictions and receiving an endorsement from the socially conservative lobbyist group Campaign Life Coalition.[112] In 2018, a bill to create "no-protest zones" around abortion clinics was introduced to the Alberta legislature following similar legislation in place in Ontario, Quebec, British Columbia, and Newfoundland and Labrador. As leader of the United Conservative Party, Kenney refused to debate on the bill and led his caucus to walkout of the house 14 times over the course of two months when the bill was at issue.[113]

LGBTQ issues
He voted against same-sex marriage as an MP, saying "A majority of Canadians support the provision of benefits on grounds such as domestic partnership relationships, which are grounded on unions of economic dependency rather than relationships of a mere conjugal nature, and yet still two-thirds of Canadians, from every culture that exists in this country, from every corner of the globe who have come to this country to build a future for themselves and their families, recognize that marriage is, as the Supreme Court said the last time it spoke to this issue in the Egan case in 1995, "by nature a heterosexual institution"."[114]

In 2016, Kenney supported the removal of "traditional definition of marriage" from the conservative party policy book.[115]

Kenney was criticized by the provincial NDP, some LGBTQ activists, and some journalists for saying in a Postmedia interview that parents generally have a right to know if their child has joined a Gay-Straight Alliance; unless it would be contrary to the best interests of the child in the circumstances.[116]

In November 2018, Kenney faced pressure to expel an outspoken member of the United Conservative Party who compared the gay pride flag to the flag of Nazi Germany.[117] Although Kenney had previously directed the party to cancel the membership of another member, he said that the decision to expel members rested with the party's board.[118]

A two-decade-old audio recording surfaced in December 2018 of Kenney boasting about overturning a gay marriage law in 1989 in San Francisco. Kenney was referring to his role in organizing a petition to repeal the city ordinance that extended recognition rights of heterosexual couples to same-sex couples. This ordinance, originating during the 1980 AIDs epidemic, extended rights that were previously exclusive to heterosexual couples, such as hospital visitation, to same-sex couples. Kenney addressed the audio clip by stating that he regrets the comments he made and that since then, his record shows he supports domestic partner arrangements and benefits for couples regardless of sexual orientation.[119] The comments led to backlash from outside and within the United Conservative Party; leading a board member and campaign manager for the party to resign his positions and membership with the party, citing the audio recording of Kenney as his reason for departure.[120]
Top

Canadian man removes Nazi flag flying above local home and burns it: 'It has to end now'

... “I’m real and I’m not fake,” Pelletier said in the video, his face obscured by a Confederate flag — which he had also removed from the house — tied around his face. “Here it is, watch this bitch burn.”

Pelletier then holds down the flag on the ground while others light it on fire. “Stop racism, this s*** ain’t cool,” he says. “It has to end now and not later.” ...

I’ll donate towards any legal costs/fines for the community improvement/beautification group. Just because you can display your pitiful participation trophy flags doesn’t mean that you should, and it’s not like Germany is any worse off for banning Nazi imagery. Anyhow, good luck getting any jury to convict.
"When you can make people believe absurdities, you can make them commit atrocities."
-- Voltaire
1312.
Top

They don't need no stinkin' NHL.

... Stone scored his tournament-leading eighth goal and Matt Murray made 39 saves as Canada downed the Czech Republic 5-1 in semifinal play on Saturday, setting up a gold-medal finale against Finland for Sunday.

The Finns are the only team to have beaten Canada at the tournament — a 3-1 victory in the opener on May 10....

Along with the Raptors, great week for Canada. Congrats and good luck.


Soccer: Sinclair to lead Canada in her fifth World Cup

Christine Sinclair was named to her fifth women's World Cup team on Saturday and will lead Canada in France where she will have a chance to also claim the career all-time scoring record on the sport's biggest stage.

Sinclair, who is four goals shy of passing retired U.S. forward Abby Wambach’s mark of 184, has been a cornerstone of the national team for almost two decades, helping Canada to back-to-back bronze-medal performances at the 2016 and 2012 Olympics and fourth place at the 2003 World Cup....

The fifth-ranked Canadians will be an interesting blend of experience and youth with midfielder Julia Grosso, forward Jordyn Huitema and fullback Jayde Riviere all 18 years old....

The World Cup runs from June 7 to July 7 with Canada starting in Montpellier on June 10 against Cameroon....

5. I figured goalie, but she's a 35 year-old forward, 36 on June 12.
https://en.wikipedia.org/wiki/Christine_Sinclair

Abby Wambach, 38, retired in 2015.
https://en.wikipedia.org/wiki/Abby_Wambach
"When you can make people believe absurdities, you can make them commit atrocities."
-- Voltaire
1312.
Top

Oh well, 3-1 again.
"When you can make people believe absurdities, you can make them commit atrocities."
-- Voltaire
1312.
Top

It's disputed whether the cartoon is the reason for his firing or not.
"When you can make people believe absurdities, you can make them commit atrocities."
-- Voltaire
1312.
Top

It's disputed whether the cartoon is the reason for his firing or not.

"Disputed" only by the publisher, who has a history of declining to run anti-Trump cartoons/commentary...
https://www.cbc.ca/news/canada/new-brun ... -1.5196179
Top

Yep. Absent a whistleblower or a document leak, all we have is what the publisher says . . . and our own common sense.

"It was terrible," de Adder, who is from New Brunswick, told the CBC News on Monday afternoon. "I gave them 17 years."

BNI is based in Saint John, N.B., and runs almost all of the print publications in the province, including three daily papers.

The perils of media consolidation. They subtracted de Adder from the entire province. 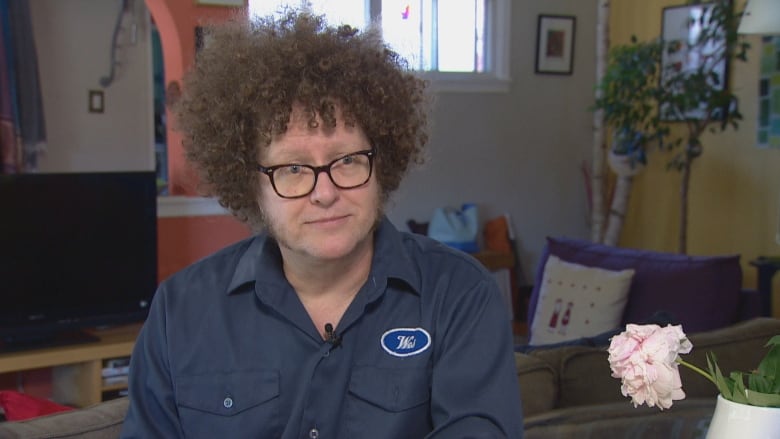 Wes Tyrell, president of the Association of Canadian Cartoonists, said the timing of BNI letting go of Michael de Adder "was no coincidence." (CBC)

He's a cartoon with a carnation, of course, that's wilted.

Cartoons from the past two weeks. #Trump 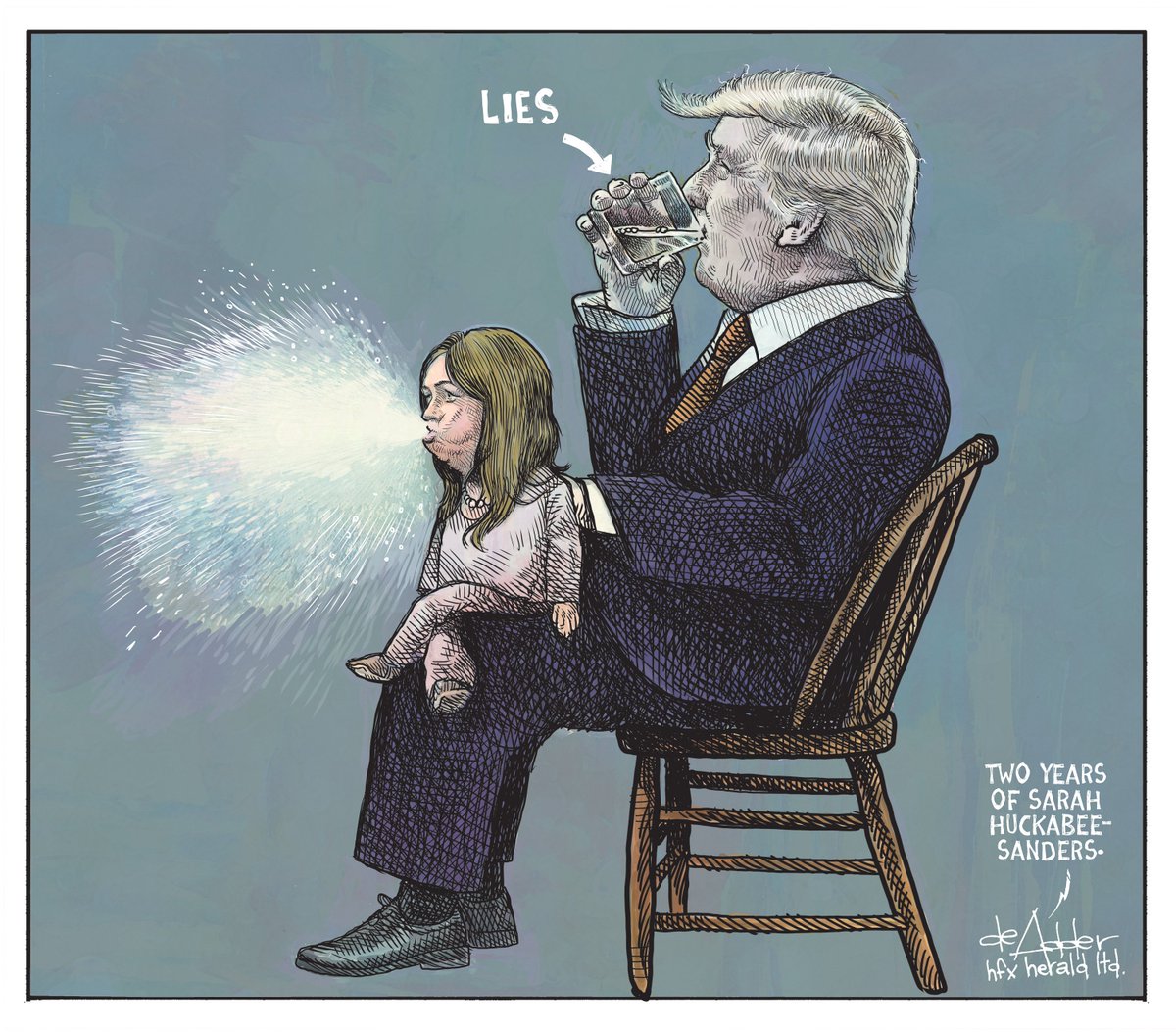 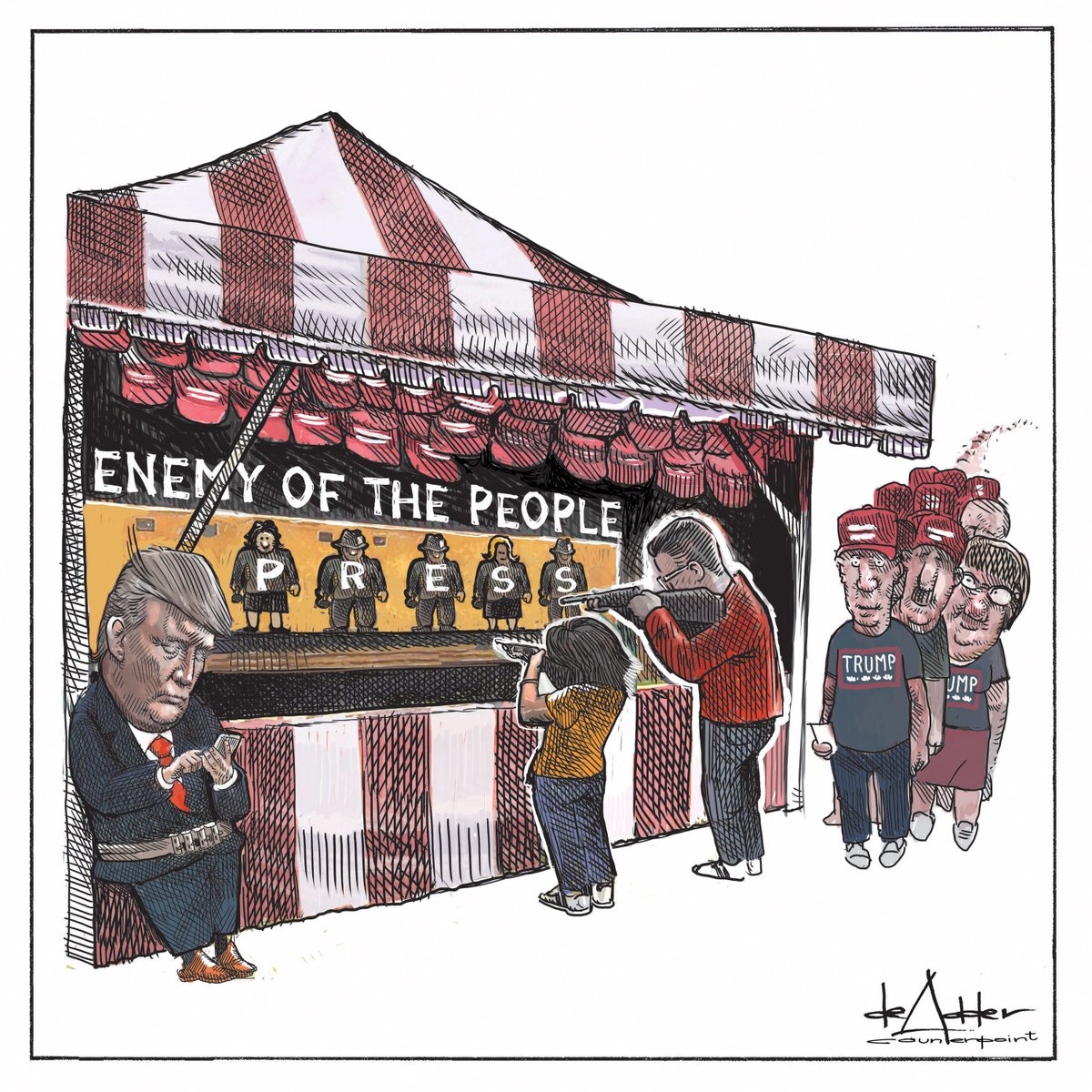 Editorial influence over cartoonists is not just a trend in Canada.

Last year, staff cartoonist Rob Rogers was fired from his job at the Pittsburgh Post-Gazette for his depictions of Trump.

"I think it's really a terrible thing for a newspaper to start getting involved in micromanaging the cartoonists," said Rogers, who noted the trend was "disturbing."

"The president is dictating very negative attacks on the media. He's calling us the enemy of the people. And I believe that that is something that a newspaper publisher should be fighting against."

Rogers said in his case, the company was willing to sacrifice the following he had built around his local cartoons "just to satisfy something that they felt about the president. And I thought that was really tragic."

According to his website, de Adder freelances for the Chronicle Herald of Halifax, the Toronto Star and Ottawa Hill Times.

In an emailed statement from the Ottawa Hill Times, editor Kate Malloy said the paper will continue to work with de Adder "for many years to come."

Cool, I hope it pays the bills.

Trying to set aside the content that I wholly approve of, he is very good.
"When you can make people believe absurdities, you can make them commit atrocities."
-- Voltaire
1312.
Top

A newspaper is entitled to its editorial point of view, and, whether true or not, often the editorial cartoon is seen by readers as representing the view of the paper. Not all papers will run Mallard Fillmore or Doonesbury as comics - choosing instead to call them editorial cartoons. So I don't have much of a problem with a given paper declining to run a cartoon that differs from its political position, nor to decline to use cartoonists who are on the different side of the spectrum.

What I have a problem with is the increasing conglomeration of "news" outlets like that one where one guy (or corp) owns all the choices. Not good.
Top
Post Reply
85 posts