Generally an unmoderated forum for discussion of pretty much any topic. The focus however, is usually politics.
Post Reply
First unread post • 959 posts

The crisis at the border is getting worse by the day. As a result of the Trump administration's cruel "Remain in Mexico" policy, families and babies are being forced to wait for their asylum hearings in dangerous, overcrowded, and unsanitary camps -- leaving them at high risk of sickness, or becoming victims of violence.

Congress is debating a bill that would immediately end the Remain in Mexico policy, and guarantee due process to asylum seekers. We need to do everything that we can to make sure it passes into law. You can help.

They've known it all along, but some rightwingers are starting to admit that 45SHOLE is a lying bigot that harms our national security.
"When you can make people believe absurdities, you can make them commit atrocities."
-- Voltaire
Top

“I could stand in the middle of 5th Avenue and shoot somebody and I wouldn’t lose voters.”
— Donald Trump, 23 January 2016

“Donald Trump’s agent can murder an unarmed, nonthreatening child and he wouldn’t lose a sycophant Justice.”
— Stacked SCOTUS, 25 February 2020
"When you can make people believe absurdities, you can make them commit atrocities."
-- Voltaire
Top 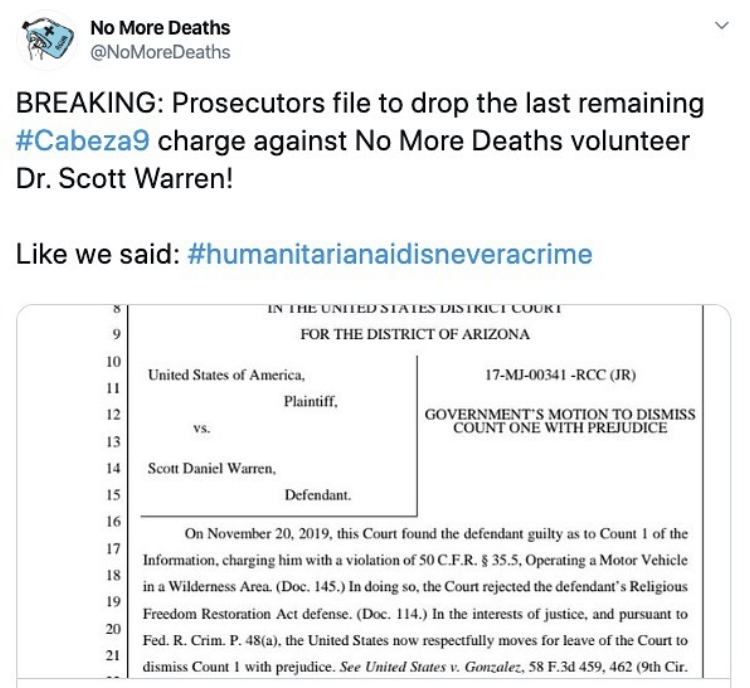 The 9th Circuit Court of Appeal’s unanimous decision issued Thursday offers justice for so many in Maricopa County.

Arpaio could appeal to the U.S. Supreme Court, though surely those justices have more important cases to consider than dealing with the vanity of a former 87-year-old sheriff.

But, hey, you never know with Arpaio. His thirst to be in the spotlight has no limits, and he may do it just to grab headlines as he pursues his bid to return to the sheriff’s office after voters ousted him four years ago.

Arpaio was convicted of criminal contempt in 2017 after disobeying a judge's order to stop work immigration raids, costing Maricopa County taxpayers tens of millions of dollars in legal and court fees over his penchant to racially profile Latinos.

President Trump pardoned him, but Arpaio wanted his criminal contempt verdict thrown out. The federal judges said no, and that should give Latinos a huge sense of relief.

To many, Arpaio has become a symbol of racism that could spread like wildfire if not rooted out. Thursday’s court decision is a light of hope that checks and balances remain strong.

How the ACLU Organized to end Racial Profiling on Greyhound Buses
You can't tell someone's immigration status by how they look or sound — that's called racial profiling, and it is unconstitutional.

... By pushing aggressively with the help of our membership and partners, we won: CBP changed its policy to reflect the correct legal position, and Greyhound came out publicly to say it would no longer consent to the agency boarding its buses....

“History will judge societies and governments — and their institutions — not by how big they are or how well they serve the rich and the powerful, but by how effectively they respond to the needs of the poor and the helpless.”

In Victory for Detained Immigrants, Federal Judge Orders ICE to Review for Release Every Person with Covid-19 Risk Factors

Thanks to PINO's dithering and lies we are the diseased peril to most other nations, not the other way around.
"When you can make people believe absurdities, you can make them commit atrocities."
-- Voltaire
Top

Most corrupt admin ever.
"When you can make people believe absurdities, you can make them commit atrocities."
-- Voltaire
Top

The Supreme Court on Monday refused to hear the Trump administration's challenge to a California "sanctuary" law, leaving intact rules that prohibit law enforcement officials from aiding federal agents in taking custody of immigrants as they are released from jail.

Only Justices Clarence Thomas and Samuel A. Alito Jr. voted to hear the administration's appeal.

The court's action is a major victory for California in its long-running battle with President Trump.

At issue was a clash between federal power and states' rights....

The court also refused to hear several cases involving gun rights and police immunity. The justices for now appear unready to reconsider past rulings that gave states ample authority to regulate guns and to shield police from lawsuits.

Gun-rights advocates have been confident that the justices were ready to grant them the ability to carry guns in public. But so far, the court's majority has given state and local officials considerable leeway in deciding who may obtain a permit to carry a concealed weapon.

In California, gun owners must show they have "good cause" to carry a gun, and law enforcement officials in Los Angeles, San Francisco and other urban areas do not grant many such permits.

The court had also been under pressure to reconsider the "qualified immunity" that shields police from many lawsuits involving excessive force. But Congress is also moving to reconsider this doctrine as a part of wide-ranging legislation on police reform. And for now, the justices appear unwilling to revisit the issue....

I'm all for revisiting the issue of police "qualified immunity", but I don't know that SCOTUS erred from a legal standpoint. We'll see what Congress and the states do.

Otherwise, haha, Trumpettes, xenophobes, ammosexuals and other haters, 'conservative' and 'bigoted gunhugger’ are not always synonyms.
"When you can make people believe absurdities, you can make them commit atrocities."
-- Voltaire
Top

DACA and Sanctuary - Roberts may be the new Kennedy.
"When you can make people believe absurdities, you can make them commit atrocities."
-- Voltaire
Top

America exists in spite of trump

Customs and Border Protection fired four employees and suspended more than three dozen others without pay after a year-long investigation into their involvement in Facebook groups featuring violent, sexist and racist posts against migrants and Latino members of Congress.

CBP said in a statement to NBC News on Friday that after an investigation into 138 cases of “inappropriate social media activity,” four employees were removed from service, 38 were suspended without pay, 33 were disciplined with reprimands or counseling and 63 of the allegations were unsubstantiated. The Los Angeles Times first reported news of the firings on Thursday.

As of July 15, six of the cases remain open, CBP said in the statement.

A year ago, officials initially announced 70 current and former CBP employees were under investigation for participating in a secret Facebook group in which users joked about dead migrants and made sexist, derogatory comments about Latino lawmakers.

The group, which at one point had roughly 9,500 members, shared comments about member of Congress, including Reps. Alexandria Ocasio-Cortez, D-N.Y., and Veronica Escobar, D-Texas, ProPublica reported last year. The group was called “I’m 10-15," the code used by Border Patrol for migrants in custody....

Rep. Joaquín Castro, D-Texas, chairman of the Congressional Hispanic Caucus, said in a statement to NBC News, for "far too long, there has been a rancid culture and systemic problems within Customs and Border Protection."

"Firing four border patrol officers for racist and sexist posts against immigrants and members of Congress is a step in the right direction to demonstrate that federal law enforcement agents cannot act with impunity," he said in the statement.

Castro said the caucus would be requesting more information from the Department of Homeland Security, of which CBP is a part of, on why "so few individuals were terminated and held fully accountable."

Certainly should be more, but it's a start.
"When you can make people believe absurdities, you can make them commit atrocities."
-- Voltaire
Top

The Horrifying ICE Documentary Trump Doesn’t Want You to See

Bastards, even more for the inhuman ICE business-as-usual than for the failed attempt at film suppression.
"When you can make people believe absurdities, you can make them commit atrocities."
-- Voltaire
Top

America exists in spite of trump

I think the Supremes reversed this the other day. Score one for fascism.
Top

ICE and PINO are accessories to murder.
"When you can make people believe absurdities, you can make them commit atrocities."
-- Voltaire
Top
Post Reply
959 posts