O Really wrote: ↑
Mon May 18, 2020 11:18 pm
Guy runs 100 miles on a treadmill on the weekend and sets a new world record. Yay.
But reporting it is what passes for "sports" on the desperate TV sports segment.
And people watched the event. People watched a guy running on a treadmill, and called it "live sports."

I might have watched the last half hour if I knew and it was free. 7:17 per mile for 100-miles is pretty impressive, even on a treadmill.

Impressive, fershure. Interesting, maybe not so much.

I might have cranked the music and done email at the same time. 8.24 mph.

I think it's going to depend on the quality/style of TV production. I didn't watch the nascar race, but in the highlights, you really wouldn't have noticed there were no fans. And that's not a joke about nascar's dwindling attendance, it's just camera focus. In-car or following, wide or close, you wouldn't notice the fans unless the camera panned the stands. And when he won, Harvick did the traditional burn-out even though he had only a TV and crew audience. I think it might be more difficult for football, where crowd noise and participation makes more of a difference. It will be strange to see a "Lambeau Leap" into empty seats. But still, the camera can cut out the stands. Mentally, though, I don't know if it will work quickly without some adjustment. When you watch a live game on TV, you get a sense of participating in the event with the fans attending. TV only and you're sorta watching it by yourself and it looks canned. Difference in live audience and laugh track. But did you see McIlroy wave and acknowledge the "crowd" at the golf charity skins game?
https://www.bbc.com/sport/golf/52704035
Top

Must take 150 people or so to put on a fanless football game. How can they possibly be kept safe?

Bundesliga: 'Bizarre, sterile and eerie' - what it was really like inside one of Germany's 'Ghost Games'
"When you can make people believe absurdities, you can make them commit atrocities."
-- Voltaire
1312.
Top

NBCSN is playing SNL reruns. Sigh.
"When you can make people believe absurdities, you can make them commit atrocities."
-- Voltaire
1312.
Top

Spring Boston Marathon was postponed until Sept, is now cancelled. Repug wishful thinking just ain't going to get us back to normal anytime soon.
"When you can make people believe absurdities, you can make them commit atrocities."
-- Voltaire
1312.
Top

You're steadily becoming a San Diegan.

Turns out, I'm not the only one the think that.
https://www.cbssports.com/nfl/news/nfl- ... -chargers/


Can you imagine how crazy sports would be right now if they weren't on pandemic hiatus?
"When you can make people believe absurdities, you can make them commit atrocities."
-- Voltaire
1312.
Top

I love seeing these kinds of headlines on the right-wing Moonie Times.

Emboldened by the athletes it serves, the NCAA is taking another stand on a social issue.

The NCAA on Friday expanded its policy banning states with prominent Confederate symbols from hosting its sponsored events, one day after the Southeastern Conference made a similar declaration aimed at the Mississippi state flag.

The current NCAA ban, in place since 2001, applies to what the NCAA calls predetermined sites, such as for men's basketball tournament games.

Mississippi is the only state currently affected by the policy. The expanded ban - supported by all eight public universities in the state - means that even when sites of NCAA events are determined by performance, as they are in baseball, women's basketball and softball, Mississippi schools will not be permitted to host.

''We must do all we can to ensure that NCAA actions reflect our commitment to inclusion and support all our student-athlete. There can be no place within college sports where any student-athlete is demeaned or unwelcome,'' NCAA President Mark Emmert said....

Five years ago, the NCAA took a stand for LGBTQ rights, invoking a similar ban on predetermined sites for its events in states that passed laws aimed at limiting protections for people in those communities. North Carolina's so-called HB2 law led to NCAA men's basketball tournament games being played in Greenville, South Carolina, in 2017 instead of Greensboro, North Carolina.

Only two years earlier, South Carolina had come off the NCAA's banned list for predetermined sites when it removed the Confederate flag from the grounds of the state capitol.

... Mississippi has the last state flag that includes the battle emblem: a red field topped by a blue X with 13 white stars. White supremacists put the symbol on the flag in 1894 during the backlash to black political power that developed during Reconstruction.

The flag has not flown on the campuses of any of the state's eight public universities in years.

On Thursday, the SEC announced it would no longer hold conference-sponsored championship events in Mississippi until the state flag is changed. The move came with calls for change from administrators at both Ole Miss and Mississippi State, but lacked real consequences. None of the SEC's high-profile events are held in Mississippi.

In a joint statement, the presidents and chancellors of Mississippi's public institutions vowed to work to change the state flag....

See the post immediately before yours for a different article on the same topic.
"When you can make people believe absurdities, you can make them commit atrocities."
-- Voltaire
1312.
Top

Members of a pro softball team quit this week in Florida after the general manager tweeted a photo to President Donald Trump bragging that the team was standing for the national anthem.

“Everyone respecting the flag!” wrote team executive Connie May in the tweet to the president’s attention Monday night.

Members of the Scrap Yard Dawgs team, which includes 11 athletes chosen for the 2021 U.S. Olympics squad, saw the message after their game in Melbourne. Outraged that May used the moment to embrace Trump’s opposition to athletes kneeling during the anthem as a form of anti-racism protest, they quit.

“We were used as pawns in a political post, and that’s not OK,” two-time Olympic gold medalist pitcher Cat Osterman told The New York Times. Osterman later told the Houston Chronicle she doesn’t accept the general manager’s explanation that the tweet came “from a good place” to illustrate team unity.

Kiki Stokes, one of two Black players on the team, said she felt “betrayed” by the organization. “I am so hurt but Hate and Ignorance will never win,” she tweeted.

I am so hurt but Hate and Ignorance will never win. 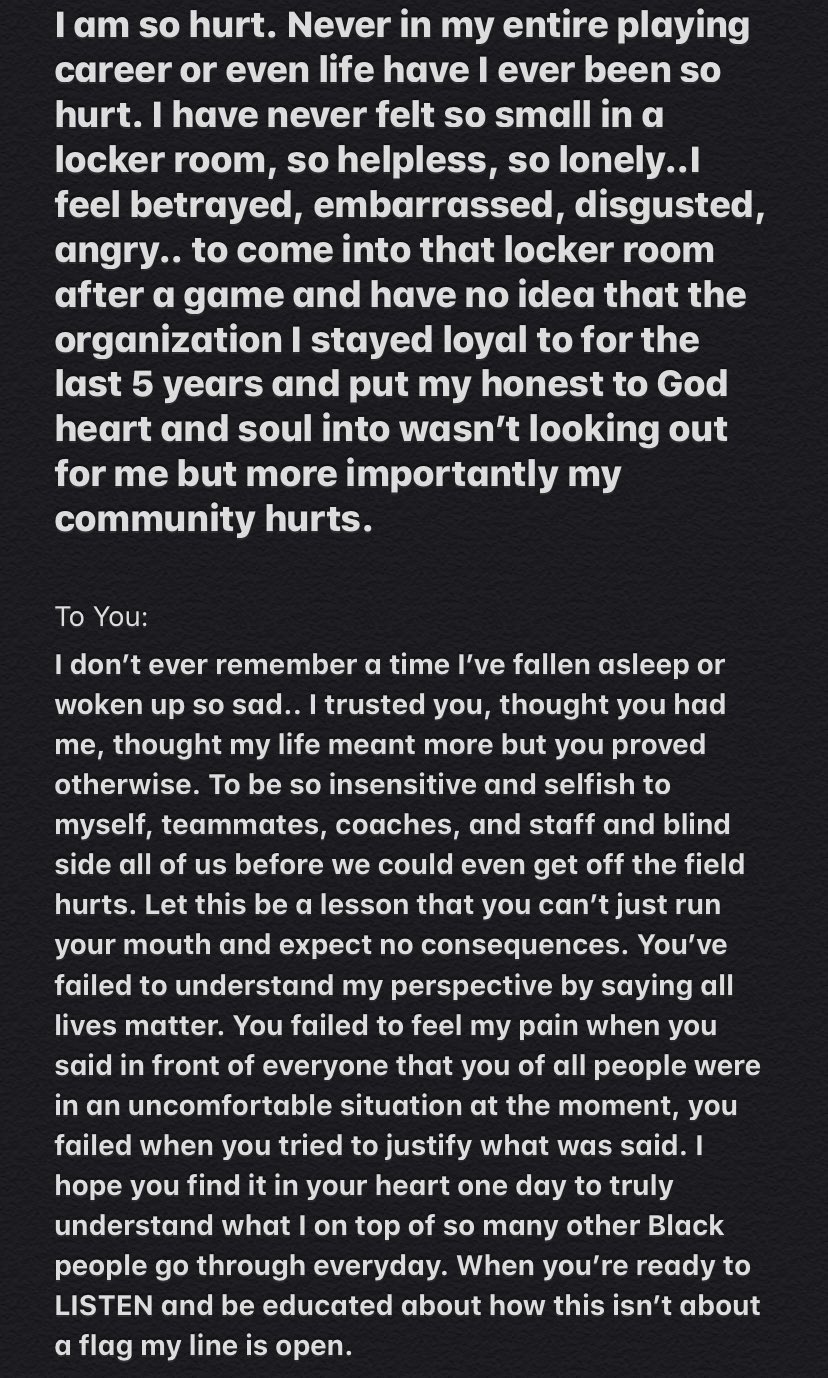 ... The team’s scheduled games in Florida were postponed while players try to reorganize without the Houston-based Scrap Yard Dawgs organization, the Houston Chronicle reported.

The team had intended to play in nearly two-dozen games in Florida as a comeback from the coronavirus pandemic.

... All 18 Scrap Yard players, including some members of the US national team, have walked out and say they won't play for the team. The USSSA Pride, another independent team, said its games will be postponed until further notice in support of the Dawgs' players. Triple Crown Sports and a group of the top youth fastpitch teams in Texas have agreed to pull a Fourth of July Tournament from Scrap Yard's facility.

And Dawgs coach Mike Steuerwald said the situation ''probably severed the relationship between ownership and the front office and myself.''

... On Wednesday, several players shared a tweet titled THIS IS US with a unified message of commitment to support the Black community and help educate people on ways to create change.

Steuerwald, who is an assistant coach at Syracuse, said he stands fully behind the players....

Triple Crown Sports says it will play its July 1-5 tournament elsewhere in the Houston area.

''We believe sensitivity and tone are important ingredients of respect,'' the organization said. ''Through sports, we can help unify the many voices that deserve support in their right to protest and call for needed change as millions of people seek a new path for justice.''

Stokes said the players from the Dawgs might play against the Pride on Saturday, but without the Scrap Yard name. Beyond that, they don't know what the future holds. Andrews said games are secondary right now.

''I think when you find matters that are bigger than your sport, you find matters that are bigger than what takes place in your life, you tend to find common ground whether you are a rival or not,'' she said. ''Allyship is really strong in softball right now. It's amazing to see everyone come together the way they did, with the immediacy that they had.''

Some skaters just don't care about physics. At all.

I think I broke my arm, my leg and my collar bone just by watching this.

Wtf why is he riding transformers?

Some skaters just don't care about physics. At all.

I think I broke my arm, my leg and my collar bone just by watching this.

Wtf why is he riding transformers?

The dudes in the background of the first video were much less impressed than me. Although one guy did look up from his phone.

Love how the people in the background are totally non-plussed. O_O Guess they're just like Isamu is at it again.

Right like... You can tell a couple of days ago he was using 3 skateboards... So this is nothing

Look for this to be taken as him saying white privilege doesn't exist by even more Stephen Smith types who just say stuff.

Look for this to be taken as him saying white privilege doesn't exist by even more Stephen Smith types who just say stuff.

I'm not sure that it's any kind of "privilege" to be hired to coach the Brooklyn Nets.