Hey Snyder, just change it. Or, don't change it, your PR and financial funeral, but what is this “thorough review"

I still like:
DC Comics
Capital Punishment
"When you can make people believe absurdities, you can make them commit atrocities."
-- Voltaire
1312.
Top

It's probably just me, but I don't know that there would be so much hating on the 'Skins if (a) Snyder wasn't such an incompetent asshole and (b) they'd been regular playoff contenders. 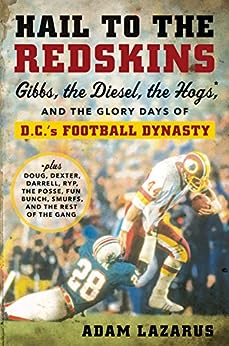 How about the Washington Nickelbacks?

While we're at it, let's stop cultural stereotyping of the Vikings.


Norse civilisation during the Viking Age was technologically, militarily and culturally advanced. Yet popular, modern conceptions of the Vikings—a term frequently applied casually to their modern Skandinavian descendants—often strongly differ from the complex, advanced civilisation of the Norsemen that emerges from archaeology and historical sources. A romanticised picture of Vikings as noble savages began to emerge in the 18th century; this developed and became widely propagated during the 19th-century Viking revival.[11][12] Perceived views of the Vikings as alternatively violent, piratical heathens or as intrepid adventurers owe much to conflicting varieties of the modern Viking myth that had taken shape by the early 20th century. Current popular representations of the Vikings are typically based on cultural clichés and stereotypes, complicating modern appreciation of the Viking legacy. These representations are rarely accurate—for example, there is no evidence that they wore horned helmets, a costume element that first appeared in Wagnerian opera.

And maybe we should work on that 49ers name too.

The man who moved into land populated by indigenous peoples, John Sutton, held the land on which the first gold was found and who basically started the rush had enslaved hundreds of Native Americans and used them as a free source of labor and makeshift militia to defend his territory and expand his empire.

The (mostly) men known as 49ers deserted their families to go west in search of gold, and the thousands of them moved out other indigenous people to form gold mining towns and camps that were essentially lawless, with rampant banditry, gambling, prostitution and violence.

Once the gold rush was underway, the 49ers developed hydraulic mining and trashed much of the region’s landscape. Dams designed to supply water to mine sites in summer altered the course of rivers away from farmland, while sediment from mines clogged others. The logging industry was born from the need to construct extensive canals and feed boilers at mines, further consuming natural resources.
49ers were not nice people.

And not to forget the Raiders, who glamorize piracy and violent crime.
Top

At least one sportswriter article floated the idea that the "Skins should move and start fresh somewhere else. New name, new town and - if any way possible - new owners. All the major owners other than Snyder are trying to sell anyway. Run Snyder off, take the team to San Diego, Oakland, San Antonio, (name it the Renegades (or maybe the Runaways) and everybody's happy. Except the actual Washington fans, if any.
Top

Sports increasing dependence on big money sponsors is coming around to bite them all in the ass. Pick a cliche - time to pay the piper, reap and sowed, whatever. Borrow money from the mob and you might get your knees broken. If you sell your soul, don't be surprised if you end up in Hell. Anyway, another sponsor demands a name change - this one for the Edmonton Eskimos.

I liked it when stadiums were/are named "Candlestick Park", "Three Rivers Stadium", Arrowhead Stadium." "Lucas Oil Stadium"? Seriously?
I don't like golf tournaments with names that give no clue as to location. What's wrong with "LA Open"? Last week's Nascar race at Indianapolis was the "BIG MACHINE HAND SANITIZER 400" Puh-leeze.

Take their money, then take their shit.
Top

Why did the Bears draft Mitch Trubisky over Patrick Mahomes and Deshaun Watson?
https://www.chicagotribune.com/sports/b ... story.html

Bears general manager Ryan Pace had sent a jolt through the draft, trading up from No. 3 to No. 2 to select North Carolina quarterback Mitch Trubisky.

It was a surprising and pivotal moment, arguably the franchise’s most significant move of the past decade. With so much adrenaline pumping, the cameras kept rolling, gathering moments that the organization could splice together for a fan-enticing social media montage.

There was Pace, upstairs at Halas Hall, congratulating colleagues in the draft room and emphasizing the collective belief the Bears had in identifying Trubisky as the quarterback they just couldn’t live without.

“When you have an opportunity to get a quarterback of this caliber, you can't pass on it,” Pace said.

The Chiefs already had a reliable quarterback in veteran Alex Smith and a playoff-caliber team that had won 12 games the previous season. Still, in Mahomes, Dorsey and his talent evaluation team saw a transcendent talent with comic-book arm strength, impressive athleticism and a penchant for creating big plays.

Finally, in Houston, the Texans were preparing to plaster Clemson’s Deshaun Watson all over the city — on billboards, on media guides, on ticket stubs. Who wouldn’t be excited about landing a quarterback who posted a 32-3 record as a college starter, becoming a Heisman Trophy runner-up and a national champion in the process?

In Houston, Watson’s statistical production and galvanizing leadership have the Texans staring through a wide-open window of opportunity with a chance to remain Super Bowl contenders for the foreseeable future.
Top

Before the "Redskins" are scrubbed and replaced with whonowhat, I thought this was the best suggestion I've heard:

O Really wrote: ↑
Sun Jul 12, 2020 10:49 pm
Before the "Redskins" are scrubbed and replaced with whonowhat, I thought this was the best suggestion I've heard:

, but they might start winning with a new name - better karma.

Where does RedTails come from?

... The story of the Tuskegee Airmen, a group of African American fighter pilots in World War II, was told in the 2012 movie “Red Tails.” That’s as close as Washington will get to the old name, while turning a negative into a positive. It would also honor the military, which based on the team’s statement is important in choosing the new name....

What’s next for Washington?

The initial review of “Redskins” is complete, and the team is expected to announce that the moniker will be retired as early as Monday. It is unclear if the new nickname will be announced at the same time.

It’s safe to assume the transition to the new nickname will happen swiftly after merchandise partners have already pulled merchandise with “Redskins” from their shelves. Sponsors also pressured Snyder and the team to change the name, along with politicians’ insistence that a new stadium on the RFK Stadium site would happen if the name is changed....

IMO, no to the Warriors, but honoring the Tuskegee Airmen would be cool, though there will be some teasing.

Introducing the “Washington Lobbyists”. When the ball is snapped the players throw money at the refs.

Washington, perhaps the nation’s most reviled city, needs a new nickname for its football team. What could possibly go wrong?

Naming opportunities are rife with ridicule, partisanship and humor:

And then there’s the Capitol Indictments

Deep Staters or Deplorables if you really want to get partisan.

On the of course more likely side are Red Tails

Maybe would help prevent extinction
or even Hogs (which pays tribute to an offensive line from long ago).

Since mid June, 14 different trademarks have been filed by people for a potential Washington football team, including Red Tails, Red Wolves, Monuments and a version of Hogs. Most are by the same person.

That means football team owner Daniel Snyder will likely have to pay off someone to get the name he wants ... Asshole, even if Snyder is the potential victim.

In the case of the Washington football team, where racism is an issue, both branding experts Davis and Watkins recommend a clean sweep, wiping away issues of racism and being more inclusive and embracing. So choosing a new name like Warriors, which can still be considered racist to some, would not be smart, Watkins said.

“Anything with any historic significance that’s negative they should just stay away from,” Watkins said.

She likes Red Tails, which is a hawk, sounds similar to the team's original nickname and pays homage to the group of African American fighter pilots who broke down racial stereotypes during World War II.

... from “The Daily Show” writer Jason Gilbert: “They should rename it the Washington Liberals Watching the Supreme Court because they usually have to settle for 3 wins per season.” ...

"The Washington Democrats" Every time they lose, they could launch an investigation into the other team.

Pick a name that at least will still go with the song.
Unless at some time in the distant past somebody Indian or pretending to be used the tune for a culture-appropriating dance around a fire.

Oh, good lord: The early arrangements of the song also closed to the opening of the well known southern folk song, "Dixie" played as a counter-melody. In July 1965, a black Redskins fan wrote to the owner of the Redskins, describing the racial unrest that Dixie caused and asking for it to be stopped.[6] According to an article in The Washington Afro-American of October 23, 1965, Dixie was no longer played as a counter-melody starting that year
Top

O Really wrote: ↑
Mon Jul 13, 2020 8:00 pm
Oh, good lord: The early arrangements of the song also closed to the opening of the well known southern folk song, "Dixie" played as a counter-melody. In July 1965, a black (DC) fan wrote to the (DC) owner, describing the racial unrest that Dixie caused and asking for it to be stopped. According to an article in The Washington Afro-American of October 23, 1965, Dixie was no longer played as a counter-melody starting that year

O Really wrote: ↑
Mon Jul 13, 2020 8:00 pm
Oh, good lord: The early arrangements of the song also closed to the opening of the well known southern folk song, "Dixie" played as a counter-melody. In July 1965, a black (DC) fan wrote to the (DC) owner, describing the racial unrest that Dixie caused and asking for it to be stopped. According to an article in The Washington Afro-American of October 23, 1965, Dixie was no longer played as a counter-melody starting that year

Blech, that song should just be retired period.

Do they play that first one in Chicago labor & delivery rooms?
That second one is cool, but do you know all the words? Does anyone?
"When you can make people believe absurdities, you can make them commit atrocities."
-- Voltaire
1312.
Top

Do they play that first one in Chicago labor & delivery rooms?
That second one is cool, but do you know all the words? Does anyone?