Possibly my worst rep. at any level, ever.
"When you can make people believe absurdities, you can make them commit atrocities."
-- Voltaire
1312.
Top

Of course, it's not really about "representation". Nothing in Apodaca's mindlessly partisan, gerrymandering, voter suppressing, democracy hating history suggest that he gives a hoot about the principle of representation. Rather, this is a sleazy and shameful attempt to use the Leg. and Governor's office to exclusively benefit the GOP. This is why his bill isn't statewide and doesn't even include my Hendersonville, which he also represents.

Don't get me wrong, I like district representation and hope that the people of Asheville and Hendersonville eventually adopt it. With it, candidates do lots more door knocking and neighborhood meetings while relying less on slates, branding, fundraising and mass advertising. Then, the elected pols do a better job of representing the particular needs of their neighbor-constituents, rather than the city-wide power structure.

So, please kill Apodaca's plot unless it's put to a vote of the people of Asheville OR it's imposed upon all cities in the state, thus advantaging and disadvantaging the GOP equally.

I had a several email exchange with Chuck McGrady over this. He basically told me that objections were not his concern since it was a "local bill", even though local Leg. Dems opposed it, that he would vote for it and that it was certain to pass, kind of a Pontius Pilate partisan defense.

A few minutes before midnight last night, the General Assembly’s Short Session came to an end. It was a peculiar ending in that a local bill relating to the redistricting of the Asheville City Council seemed to trigger the legislature to just fold up its tent and go home....

My predictions about what would happen at the end were mostly correct, with one major exception.

Regulatory Reform. The surprise of the session, in terms of bills that didn’t pass, was the failure of the legislature to pass any regulatory reform bills. There were a host of such bills, H 169 [Regulatory Reduction Act of 2016], S 303 [Regulatory Reform Act of 2016], H 593 [Amend Environmental & Other Laws] and H 763 [Military Operations Protection Act of 2016], that were being considered by a conference committee. At a committee meeting that ended at nearly 1:30am on the last day of the session, it seemed that the conferees were close to agreement. All but a handful of issues were resolved, leaving House conferees sharply divided over an provision relating to the internet sale of alcohol by distilleries, with House conferees not fully supportive of a compromise on repeal of the ban on electronic devices in landfills, and no agreement on a new law regulating the installation of wind farms in the potential flight paths of military aircraft.

Being one of the conferees, I went to bed on the last morning expecting that those issues would be resolved and we’d pass another broad regulatory reform bill. It didn’t happen. Support for specific language related to wind farms and the military were late developing. The electronic recycling provision was controversial in the House, and many legislators, both Republicans and Democrats, just didn’t want to take up that issue feeling that it was a Long Session issue. Any legislation relating to alcohol is always controversial in the House, and some Republican Members just didn’t want to vote on the issue as part of a large, regulatory reform bill.

The Senate understandably felt that it had agreed to most of the House’s regulatory reform provisions and had made compromises in its proposals. When the House rejected two relatively minor bills put forward by senior senators, S 897 [ Asheville City Council Districts] put forward by the Senate Rules Chairman, Senator Tom Apodaca (R-Hendersonville] and S 46 [Jacksonville Occupancy Tax] put forward by the Senate Majority Leader, Senator Harry Brown (R-Onslow), further negotiations on the three outstanding issues simply didn’t occur. The Senate refused to respond to a House offer to resolve one issue in the Senate’s favor, wind; to resolve one issue in the House’s favor, electronic recycling; and put the remaining issue in a separate bill to be voted up or down in the House, alcohol.

Good, it's sweet that S 897 [Asheville City Council Districts] flopped after my arguing at length with Chuck McGrady over it and that it was also somehow the cause of the precipitous adjournment, but still :-0?> .
"When you can make people believe absurdities, you can make them commit atrocities."
-- Voltaire
1312.
Top

I could maybe - maybe - see some Republican guy from some little down east town voting for the Asheville districting bill just because Apodaca wanted it. I can't see anybody from Charlotte, Triad, Triangle, even Wilmington doing so without at least thinking, "he's screwing over the city...wonder if it could happen to me." But McGrady lives here. He knows it was a shit bill, and he knows the entire city council (who were, after all, elected to run the city) opposed it. He isn't going to have to deal with Apodaca anymore anyway. For him to vote for it is despicable. Not that I'm surprised.

Thanks. Yeah, McGrady was much more independent when he first arrived in the Leg. Though his comms with constituents are still the best I've ever seen, it's been disappointing watching him steadily become more sleazily partisan each session as he accrues more power.
Last edited by Vrede too on Sun Jul 03, 2016 9:39 am, edited 1 time in total.
"When you can make people believe absurdities, you can make them commit atrocities."
-- Voltaire
1312.
Top

No sleazy partisanship, no accrual of power. It's not like the two are unrelated.
Top

Yeah, I suspect he got spanked for at times being independent. Still no excuse.
"When you can make people believe absurdities, you can make them commit atrocities."
-- Voltaire
1312.
Top

The reason things ran as well as they did during the 140 years of Democratic majority in NC is that the Democratic Party was indeed a big tent, encompassing many from right to left with a bunch in the middle. And there were a lot of issues that most everybody agreed with to some degree. So the state had a world-class university system, good roads, decent public schools with decent teachers paid middle-of-the-road, yada. Nobody could push through bills that were totally batshit crazy because they couldn't get the votes. And nobody - even the old-style Republicans - held as their top priority simply voting against the other side. Republican Governor Holshouser did a generally fine job, without being constantly bashed just for existing.

Contrast that to the current crop of Republican loons, who find solutions where there were no problems, just because the Dems did it (whatever "it" is).
Who drive their legislation by political vengeance and payback for personal issues. Who pass laws everyone knows (and tells them) are going to get overturned in court. Etc.

I hope they all get Zika bit and have gay bi-racial grandkids.
Top 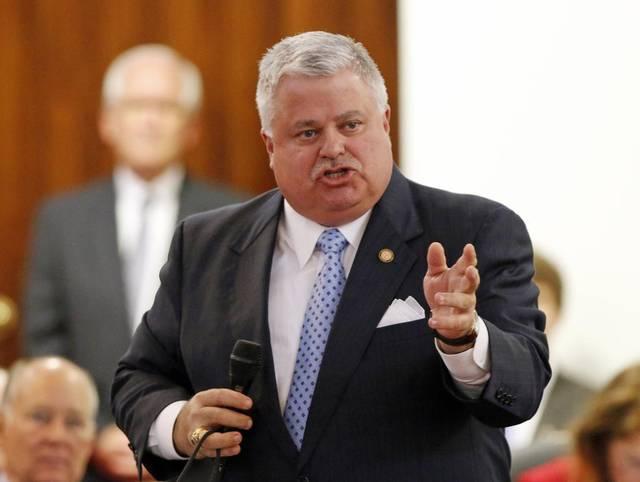 Screw you, Apodaca, Moffitt and McGrady.
Last edited by Vrede too on Thu Dec 22, 2016 9:22 am, edited 1 time in total.
"When you can make people believe absurdities, you can make them commit atrocities."
-- Voltaire
1312.
Top

This, the HB2 fiasco and national ridicule over the "coup" - not a proud 2 weeks for the NC GOP.
"When you can make people believe absurdities, you can make them commit atrocities."
-- Voltaire
1312.
Top

New version of my letter above sent to Rep. McGrady, Governor Cooper, and democracy hating Sen. Apodaca Chuck Edwards.
"When you can make people believe absurdities, you can make them commit atrocities."
-- Voltaire
1312.
Top

Ick, here in Hooterville the mayor is unopposed and I have reason to not like each of the 4 city council candidates vying for the 2 slots. So, this will be one of the rare elections that I sit out.

My prediction: The 2 white men will beat the 2 black women.
"When you can make people believe absurdities, you can make them commit atrocities."
-- Voltaire
1312.
Top

Below are my primary options. Any advice on which ballot I should choose, then which candidates on it and why for both questions?

STATE OFFICES
District Attorney
District 42
(You may vote for ONE)

Sheriff
(You may vote for ONE)

Board of Commissioners, District 1, Dem Primary, running against incumbent Republican Mike Edney:
I can't find that either Patricia (Pat) Sheley or Michelle Antalec have websites, and the HT-N coverage sucks. So, fuck 'em.

US House of Representatives, District 11 has been severely gerrymandered to favor the GOP. Kudos to the Dems running, but the primary winner will lose. So, I haven't even looked at which Dem would be better.

So, I'll get a GOP ballot, seems I can have more impact. Unlike some years, there doesn't seem to be opportunity for me to vote for the worst Repug in order to help the Dems in the general.

US House of Representatives, District 11, GOP Primary:
Mark Meadows has been awful.
Chuck Archerd gets my vote by default.

Board of Commissioners, District 4, GOP Primary, no incumbent and no Dem running:
Don Ward, https://www.facebook.com/Elect-DON-WARD ... 189339516/ , ick
Rebecca McCall, https://www.rebeccamccall.com/ , so-so, she gets my vote

Primary is May 8. So, I have time to change my mind if y'all have a reason for picking the Dem ballot or for picking different Repugs.
Last edited by Vrede too on Tue Apr 24, 2018 10:15 am, edited 2 times in total.
"When you can make people believe absurdities, you can make them commit atrocities."
-- Voltaire
1312.
Top

Since your vote isn't going to make much difference anyway, I'd vote for whoever didn't make me barf. Which would eliminate all Repugs.
Top

O Really wrote: ↑
Mon Apr 23, 2018 3:19 pm
Since your vote isn't going to make much difference anyway, I'd vote for whoever didn't make me barf. Which would eliminate all Repugs.

Okay, Vox, what have you done with O Really?

Not that I have a problem with eliminating all Repugs

, but that would mean not voting at all in 3 races where there will be no Dem in Nov.

, I will be pointlessly voting for the Dem candidate for Board of Commissioners, District 1 and the Dem or Libertarian (why not, if the pools aren't close) candidate for US House of Representatives, District 11.
"When you can make people believe absurdities, you can make them commit atrocities."
-- Voltaire
1312.
Top